The Mossberg 590 Retrograde 12 Gauge Pump-Action Shotgun features an 8+1-round capacity and a fixed LOP type. The shotgun is built with a matte-blued heat shield barrel and a cylinder bore choke, and it includes a walnut stock and a bead sight.

The Retrograde is a 12-­gauge pump-­action shotgun that pays homage to the original 590A1, a staple of military and police for decades. These durable, reliable and user-­friendly shotguns were also affordable to the private citizen, where they gained widespread popularity for home defense.
Many consider the 12-­gauge pump-­action shotgun the ultimate close-­quarter weapon, and the 590A1 is perhaps the most combat-­proven variant. In fact, since 1979, Mossberg’s 590 and 590A1 models are the only shotguns to have passed all of the United States’ military 3443 specification requirements. The specification predicates interchangeability of parts in the field, as well as the ability to withstand a 3,000-­round endurance test.

The average citizen may never put 3,000 rounds through their shotgun, but it’s comforting to know that a tool you may employ to defend yourself and your family is overbuilt. The 590A1 is a trusted partner with a proud tradition of protecting American lives.
Make no mistake, the Retrograde is a serious shotgun, perfect for home defense despite it’s obvious lack of polymer.
Shotgun Versatility
In close quarters, the 590A1 is a devastatingly effective weapon, especially when loaded with 00 buck. Nine .32-­caliber pellets traveling about 1,200 feet per second (fps) goes a long way toward keeping you safe. Pretty scary stuff if you’re on the receiving end. In fact, the unmistakable sound of a pump shotgun being racked has been known to halt would-­be assailants in their tracks. However, buckshot isn’t always the appropriate load.
While 00 buck is devastating from close range, 25 yards is about as far as you can be from the threat to responsibly account for all of the pellets. Beyond that distance, the pattern widens considerably. On the other hand, with 1-­ounce slug rounds, the shotgun is a formidable weapon out to at least 100 yards, depending on several factors, not the least of which being marksmanship. Slugs afford the shooter rifle-­like accuracy and the ability to easily penetrate most intermediate barriers, such as the passenger compartment or trunk of a vehicle, behind which an assailant may be hiding.

There is no shortage of 12-­gauge pump shotguns on the market, so what sets the 590A1 apart? Well, affordability and reliability are major factors, as well as the impressive list of standard features.The Mossberg 590A1 Retrograde’s walnut stock is as comfortable as it is beautiful.
The controls on the 590A1 are intuitive. The tang safety enables the shooter to easily manipulate the safety off and on with either thumb. Simply push forward to disengage the safety and pull back to activate it. Many prefer the tang style safety to the cross-­bolt style safety on the Remington 870, another popular law enforcement and home defense shotgun.
The cross-­bolt safety requires a different motion to operate, depending on whether you’re a right or left-­handed shooter. Also, it’s not as easy to visually confirm whether or not a cross-­bolt safety is engaged.
Over the years, the 590A1 has undergone several design changes. Traditional hardwood components like the stock and forend were replaced with polymer, which is lighter and more impervious to dents and dings that could blemish hardwood. A quick glance at the Mossberg website reveals a wide array of 590A1 models.
With a nine-shot capacity and a bayonet lug, the Mossberg 590A1 Retrograde is battle ready with an old-school vibe.
The 590A1 line features heavy walled barrels, cylinder bores and barrel lengths ranging from 18.5 to 20 inches. Capacity ranges from 7 to 9 shells. The heavier walled barrels, aluminum triggerguards and metal trigger groups are what differentiate the 590A1 from the 590, which is more economically priced.
Some 590A1 models come with a pistol grip, although I’m not a fan. Pistol grips aren’t bad, but when combined with the tang safety, they become quite cumbersome. A shooter has to compromise their shooting grip to work the safety. That’s why I’ll leave the pistol grips to the AR-­15s.
I’ve owned a 590A1 for years. It has a fixed polymer stock and ghost ring sights, which are well suited for home defense because they are easy to acquire under duress and conducive to accurate shooting. My 18.5-­inch barreled 590A1 is one of several firearms I keep on hand for home defense.
The ghost ring sights on the Mossberg 590A1 Retrograde adds to the old-school vibe.
Rolling Out the Retrograde
The 20-­inch barreled 590A1 Retrograde looks like something John Rambo may have wielded. In fact, it’s even reminiscent of much older shotguns dating back to World War I. From the Parkerized finish and walnut furniture to the distinctive heat shield covering the barrel, the Retrograde definitely exudes an old-­school vibe.
The simplicity, beauty and durability of a fixed walnut stock is desirable for those with an affinity for traditionally styled shotguns. The same can be said of the forend. Polymer is fine, but there’s just something about the way a walnut stock feels against your cheek or the way the corn cob style walnut forend feels in your hand.The Retrograde sports a bayonet lug, which may not be the most practical feature, but who wouldn’t want to be able to mount a bayonet to their shotgun? The Retrograde’s bayonet lug is a throwback to the “trench gun” of the Great War. When your shotgun was empty, it could immediately be employed as a spearing weapon. Even without a bayonet attached, the lug is a stark reminder that this shotgun was built for battle.

The 590A1 Retrograde’s ghost ring sights and orange-­painted front sight blade facilitate fast and accurate fire whether obliterating a target in close quarters with buckshot or while making a precise shot at distance with a rifled slug. There are a variety of sighting options for the 590A1, but the ghost-­ring style is far and away my favorite for defensive purposes and was a solid choice for the Retrograde.
Retro Range Time
Having plenty of time shooting 590A1 shotguns, the 590A1 Retrograde performed as anticipated. I started at the 5-­yard line with 00 buck and gradually moved back to the 25-­yard line. I was shooting Winchester Super-­X 2¾-­inch 00 buck (nine pellets), and from 25 yards, all nine pellets remained on the B-­27 silhouette target. While shooting the Retrograde, I noticed the walnut furniture and heat shield made it a little heavier than the polymer furnished 590A1s I am accustomed to. The Retrograde tips the scales at 7 pounds. Still, the weight was very manageable, and the shotgun felt well-­balanced. The action was smooth, and recoil was on the soft side as far as 12-­gauge shotguns go. The rubber buttpad on the end of the stock undoubtedly helped dampen felt recoil
Features and Benefits
Specifications
What’s in the Box
Important Product and Safety Information

There are no reviews yet. 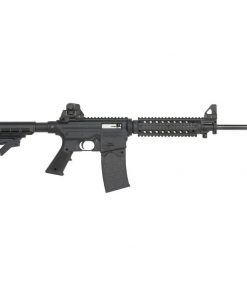